from  Secret Voices from the Forest, Volume Two: 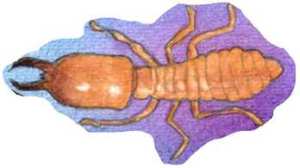 I’ve been working on the Companions for several months now, and will be showing a few of them, more or less as they will appear in Volume Two, as well as other bits and pieces, till the Volume is released. I’m guessing that won’t be till 2014 at the earliest.

Eastern Subterranean Termite
Reticulitermes flavipes forms subterranean colonies of several hundred to several million individuals. Members of the highly organized community consist of three castes: workers, soldiers, and reproductives. The largest number of colony members, the workers, are sterile and do all the grunt work, but are capable of molting into other castes. Soldiers, whose job is defending the colony, cannot molt into anything else, and also cannot feed themselves, so are fed by the workers. They only make up one to two percent of the colony. The reproductives—the king, queen, alates, or winged primary reproducers—those destined to start new colonies, alate nymphs, and supplementary reproductives (spares), make up the rest.
All castes look different. Workers are blind, wingless, and about 1/8 inch long. Soldiers are slightly larger, and have large mandibles that are used for defense. Alates have wings and compound eyes and are a darker color. Queens can produce up to 2000 eggs a day, adding extra sets of ovaries, their bodies can become massive, their extended abdomens getting as long as 3.5 inches over the period of their forty-five year life spans. The king, who looks more like a worker, remains necessary to the queen’s reproductive ability for life, unlike ant consorts, who mate with their queen only once, then become superfluous.
Although termites ingest wood, they cannot digest wood fibers. They rely on protozoa, single-celled animals, and bacteria living in their gut to free up the cellulose. Because termites can produce up to two liters of hydrogen from digesting a single sheet of paper, they are one of the planet’s most efficient bioreactors. Fermenting bacteria in the bodies of the termites produce simple sugars, which are then used by other bacteria, producing hydrogen as a by-product. The U.S. Department of Energy is studying this process, and hopes there is potential to scale it up enough to generate commercial quantities of hydrogen from woody biomass.